How do you sing when you are 80 years old? In his first ‘live’ show since the pandemic curtailed the Never Ending Tour, Bob Dylan makes an immaculate demonstration to the world of exactly how much his foray into the singing styles of Sinatra and the other crooners has embellished his late performing style. The SHADOW KINGDOM  show is that absolute rarity – Dylan actually specifically crafting, rearranging and ‘representing’ his songs for a TV show. This is not really a ‘live concert’. It seems that all the music and singing was pre-recorded. The set up, we are supposed to believe, is in some kind of ‘intimate’ nightclub, existing in a nonspecific ‘retro world’ where everyone appears to be smoking all the time and everything is presented in monochrome. The presentation has slightly eerie echoes of the 1964 ‘Quest’ TV show in which Dylan performs his songs while pretending to be in some lonesome frontier café full of men in checked shirts. Here we are in a kind of 1950s of the present. The credits thank the rather wonderfully named ‘Bon Bon Club’ in Marseilles which, if we are being naïve, we may imagine the show was filmed. Of course, there is no such establishment. The ‘patrons’ are actors and the smoke we see is almost certainly fake. In terms of its general ambience one is reminded of the videos Dylan made for his ‘Sinatra era’ shows. 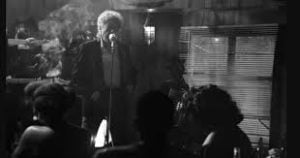 The show is not, as many of us hoped, an opportunity for Dylan to give us live versions of songs from ROUGH AND ROWDY WAYS.  Yet in many ways the sound of the music is not too far away from that epochal album. It is subtitled ‘Early Songs of Bob Dylan’. Of the thirteen selections, only one (What Was it You Wanted) is from the 80s. The rest are from the ‘60s or early ‘70s. The most surprising element is undoubtedly the presence of a completely new band of backing musicians – with no drummer. Each song has been rearranged to suit Dylan’s new vocal approach, which combines the lessons he has learned from the crooners with many elements of his own styles from the past. There is certainly no way that he can be accused of ‘croaking’ his way through the songs. The gravelly tones of the Together through Life and Tempest have vanished. Another surprising facet of the show is that for the first time in nearly twenty years Dylan never touches a keyboard, sometimes playing acoustic guitar but otherwise concentrating on his singing, standing firmly at the side of the stage with his hands by his side, sometimes gesticulating to illustrate his lyrics. 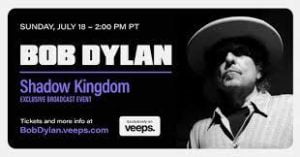 Dylan’s audiences are used to seeing him recreate his songs on stage. But in Shadow Kingdom every single song is given an extensive makeover. The opener When I Paint My Masterpiece retains the lyrics about hiding away to compose which Dylan featured on his 2018 and 2019 tours but sounds more reflective here. The musicians play in a restrained way which allows Dylan’s vocals to take centre stage. Every word is carefully pronounced, with many subtle vocal nuances. Sometimes he sings, sometimes he speaks…. Always he acts out the songs with great subtlety. The whole show demonstrates to the world that he has moved into yet another phase of his career; one in which his renewed vocal power is placed (often quite literally) centre stage. His interest in reinterpreting his old songs is undimmed. When he performs a newly accordion-led Most Likely You Go Your Way and I Go Mine he stands at the side of the stage without an instrument, pointing at the audience from time to time, so that the song becomes part of a conversation with the audience. Here, as in almost every performance in the show, Dylan enunciates with beautifully weighted light irony. 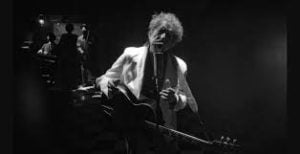 The reinterpretations of three songs from Highway 61 Revisited are perhaps the most radical in terms of Dylan’s approach. Queen Jane Approximately is delivered slowly and soulfully, in a way that emphasises the song’s winning melody, with Dylan sighing from the distance of many years about the vicissitudes of the youthful title character – who may be a ‘misled’ young girl, the conceptual artist Andy Warhol or Dylan himself. Or quite possibly a combination of all three. Tombstone Blues, normally a fully ‘rocking’ number consisting of a surreal trip through American past and future history, is treated as an almost spoken recitation. Just like Tom Thumb’s Blues is given a similarly languid treatment as Dylan recounts this convoluted tale of drugs and women (which are possibly, in this case, interchangeable) in a mythic version of Mexico, with a world weary grace. 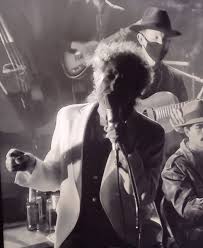 Dylan also makes radical alterations to some of his late ‘60s works. The Wicked Messenger is presented as a series of philosophical questions. A bluesy I’ll Be Your Baby Tonight is presented with two haughtily sexy young ladies on each side of the singer. Midway through the song one of them flicks something from the shoulder of his white suit jacket. She remains expressionless and cool. Dylan is back on guitar for a completely rewritten To Be Alone with You which he turns from a simple love song into an expression of obsession: …I’ll hound you to death, that’s just what I’ll do… he cries …I’ll not sleep a wink/ ‘Til I’m alone with you… And then he offers his thoughts to the universe: …I’m collecting my thoughts in a pattern/ Moving from place to place/ ‘Steppin’ out into the dark night/ Steppin’ out into space… 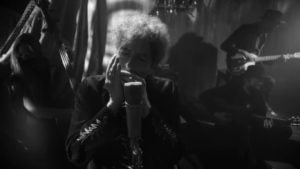 Dylan fans are also treated to an ultra rare rendition of Pledging My Time, delivered as a slow, thoughtful blues, along with a powerfully stripped down  What Was it You Wanted, a slowed down Watching the River Flow and an almost spoken It’s All Over Now, Baby Blue. Every performance is richly intense, but perhaps the outstanding track is the version of Forever Young, delivered here in full crooning style with Dylan very careful to express every word and to convey every emotion with absolute clarity. 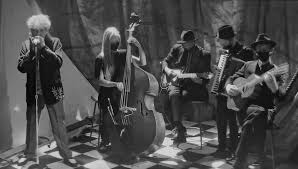 With Shadow Kingdom Dylan completes his reinvention as a singer, triumphantly demonstrating that his years spent at the feet of ‘Mr. Frank’ were not, despite the impatience of much of his audience, spent in vain. He shows that he has finally found an appropriate vocal style to carry his work forward into an unknown future. Despite his years, he appears to be full of vivacity and creativity. Fans may hope that there will be a Shadow Kingdom Part Two, featuring some of his more recent songs. Perhaps Dylan will take this new band out on tour when the NET resumes. Whatever happens, this performance eloquently demonstrates that the ‘poet laureate of rock and roll’ still has many surprises up his sleeve for us to savour in the years to come. 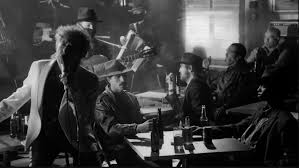 ‘Shadow Kingdom’ was streamed online by veeps.com on 18th July 2021.

Previous post WITH YOUR SAINT-LIKE FACE AND YOUR GHOST LIKE SOUL: SAD-EYED LADY OF THE LOWLANDSNext post REVIEWS Of ‘DETERMINED TO STAND’: THE REINVENTION OF BOB DYLAN