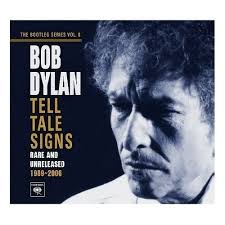 Sometimes like women or unwedded maids
Shadowing more beauty in their airy brows
Than have the white breasts of The Queen Of Love…
Christopher Marlowe, Dr. Faustus

Little by little, bit by bit
Every day I’m becoming more of a hypocrite…

The main story which Tell Tale Signs tells is that of Bob Dylan’s reinvention in the 1990s, with particular emphasis on the Time Out Of Mind period, but there are also a couple of more recent studio outtakes which constitute significant variations on the originally released versions. In what is presumably an earlier take of Someday Baby, the tone of the vocal and musical performance is slightly harsher and harder edged than the one on Modern Times.  The rhythm here is tighter, less relaxed and the vocal more uncertain and jumpy. While the message of self-mocking disillusionment with the love object remains basically the same, the singer here sounds rather more bitter and vulnerable. Or at least, he’s trying to fool us into thinking he feels like that… The lyrics, which differ substantially, are also somewhat more direct and self-critical in tone, and less allusive. The difference between the two versions illustrates how Dylan can use two types of blues expression – raw emotion and detached reflection – to create varying modes of expression for the same song. Whereas in the final version the singer appears to have transcended the rough treatment he had received from his lover, here he still harbours dark thoughts of disposing of her. …Gonna blow out your mind, and make you pure… he mutters… I’ve taken about as much of this as I can endure… But the performance is not really venomous enough for us to believe that (unlike the cold hearted narrator of Robert Johnson’s 20/20 Blues which Dylan covers on Disc Two) he really means this. So we are left with an impression of someone wounded into inaction, using the song to allow his revenge fantasies a safe escape route.
The singer’s technique in addressing the girl is a kind of deliberate self-abasement, a pretence that he is not really asking for her pity. Early on in this version he casts himself deliberately into self-abjection: …Little by little, bit by bit… he begins, the ‘babyish’ words suggesting a kind of mock timidity …I’m becoming more of a hypocrite…  Then we hear how she has made him suffer …You made me eat/ A ton of dust….  he complains. …You’re potentially dangerous, and not worthy of trust… which follows, sounds a little awkward and perhaps a little too analytical for this kind of song. Maybe that is the point, though. The narrator here actually sounds rather scared of his lover. When he sings the similarly awkward …When I heard you was cold, I bought you a coat and hat/ I think you must have forgotten about that… he really sounds rather pathetically forlorn. Playing the martyr, he tells her he will ‘turn the other cheek’ to her insults. So that when he threatens he’ll ‘wring her neck’ this seems entirely unconvincing. By the time he tells her that …if all else fails, I’ll make it a matter of self-respect… he’s really squirming. By now the girl has probably turned away haughtily, not impressed by what she sees as a rather pathetically inadequate display of bravado. 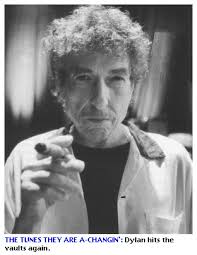 In many ways the Tell Tale Signs version of the song is more teasingly ambiguously that the smoother Modern Times take. Dylan inhabits the song a little more, mainly by exaggerating the ‘forsaken lover’ persona. The recording is driven by Tony Garnier’s more pronounced throbbing bass line, against which Dylan’s voice is slightly more cracked and plaintive. Maybe this version did not quite gell with the sense of restrained control that he is closer to on the finished album. The same can be said, perhaps, for the alternate version on Disc Two of the apocalyptic Ain’t Talkin’ , which on Modern Times is a slow-building rumination with broodingly violent overtones. Here the track is shorter, punchier – with a faster, more pronounced rhythmic pulse which suggests a mood of panic and despair rather than the grim resignation of the final version. The almost spoken vocals strain against the compelling heartbeat that drives the song on. The lyrics begin to diverge in the middle of the song. As with Someday Baby the tone is less accepting of fate, more desperate. And in this less controlled version of the song, there is no time to lose : … I’ve got no time for idle conversation… the singer tells us ….I need to find a doctor in this town…  Here the narrator seems careworn, so stressed he has become ill. …I’m all worn out with public service, I’m beginning to crack… There is none of the steely determination which prevails in the climax to the Modern Times track. …I’m gonna throw myself upon your loving breast… he wails, either to his lover or his savior (though there is much less explicitly ‘religious’ imagery here. 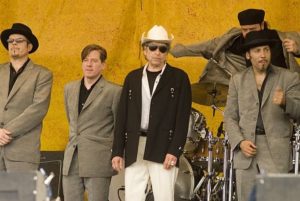 In the most remarkable verse of the Tell Tale Signs version the narrator is cowed by a vision before which he can only tremble. Here the ‘mystic garden’ is bathed in bright autumnal light and illuminated by resonant, allusive symbolism. The faster rhythm and pronounced alliteration emphasizes the singer’s terror: …It’s the first new day of a grand and a glorious Autumn/ The Queen of Love is coming across the grass … In this version he bows down before this Amazonian figure, obviously a beautiful and very powerful woman …None dare call her anything but ‘Madam’/ No one flirts with her or even makes a pass… he tells us in awe. This vision seems to be the ‘main event’ of the song at this point.  Here he confronts what appears to be the source of his distress. The Queen Of Love (Virgil’s name for Venus in The Aeneid) has him conquered. He kneels at her feet, bowed into submission. In the next variation on the chorus we see him …standing outside the Gates of Wrath… The last phrase is a direct reference to William Blake’s poem Daybreak, which runs: …To find the western path/Right through the Gates of Wrath/ I urge my way…  Blake’s poem presents a vision earthly of peace and reconciliation but Dylan’s narrator he stands ‘outside’ those gates. He is excluded from redemption. In a lovely ironic touch we hear that instead of entering the gates he has to …take a little trip along the primrose path…  Here the allusion is to Hamlet (1:3) where Ophelia, challenged by her brother Laertes over her attraction to Hamlet, makes a sarcastic aside referring to Laertes’ own dalliances: …Himself the primrose path of dalliance treads… she says, scornfully. Dylan’s hero, like Shakespeare’s has been driven half mad by love. But he has to follow that ‘primrose path’ to whatever part of the ‘mystic garden’ it leads. 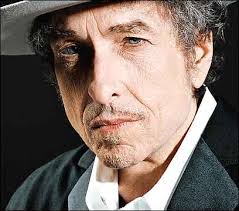 It is perhaps a pity that we lose this verse in the Modern Times version of the song, but there Dylan takes Ain’t Talkin’ in a rather different direction. Here the apocalyptic violence of that version is only hinted at. This version ends with a repetition of the song’s first lines, bringing us back full circle, followed by the enigmatic …Ain’t talkin’ /just walkin’/ You ride ‘em high and down you go….  Along with the earlier reference to …all rails leading to the west… this seems to suggest more of a frontier/cowboy scenario than the final version. The imagery here points towards a mythic past and the song seems to be more focused on the idea of the ‘mystic garden’ as a kind of Edenic vision of ‘frontier America’. Dylan’s ‘mystic traveller’ here is still ruthless, still ready to ‘slaughter his enemies’, but here he rides off into the sunset in the time-honoured way, following that ‘primrose path’ wherever it will lead. 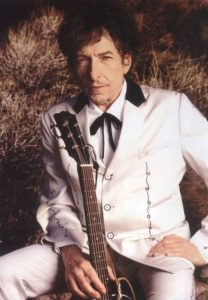