… I walk alone through the shakin’ street…

In recent years, in his interviews and in his Theme Time Radio Hour  show, Bob Dylan has professed considerable admiration for ‘crooners’ like Bing Crosby and Frank Sinatra. This may have come as something of a surprise to those who associated Dylan with the deliberate harshness of his early 60s vocal style and the pronounced unsentimentality and emotional detachment in his early love songs like It Ain’t Me Babe, Don’t Think Twice, It’s All Right and One Too Many Mornings. Yet, as his radio show and his reminiscences in Chronicles Volume One reveal, Dylan’s tastes have always been highly eclectic. Since the mid-80s, his embrace of mainstream ‘romantic’ tradition in American song has grown to become a more and more prominent feature of his work.  He had flirted with such material before, most notably on the unfairly maligned Self Portrait album in 1970, but his own songs of the 60s and 70s had pretty much all been composed within the framework of folk, country and blues disciplines. By the time of 1985’s Empire Burlesque he was making tentative forays into ‘Great American Songbook’ territory with ballads like I’ll Remember You and Emotionally Yours, both of which were couched in conventional romantic terminology and were structured like ‘professional’ pop songs with middle-eight passages designed as a counterpoint to the songs’ melodies.

At this point, however, Dylan could be said to be still finding his way with the form. These songs come over like deliberate exercises in writing the kind of songs people did not associate Bob Dylan with. By the late 90s, however, the inclusion of a far more fully realised piece of work like To Make You Feel My Love suggested that Dylan had been able to integrate such material in more credible way into his performing and songwriting repertoire. In songs of the 2000s like Moonlight, Bye And Bye, Beyond The Horizon, When The Deal Goes Down and Life Is Hard he would explore the nuances of such styles in more detail and would find ways of fusing such stylizations with more poetic and experimental lyrical forms. Born In Time, which originally appeared on the Under The Red Sky album in 1990, is positioned somewhere between the earlier and the later material. Its tone is romantic and wistful and it attempts to marry romantic cliché with poetic metaphor. Its effectiveness depends very much on the passion and conviction with which it is performed. The two versions of the song which appear on Tell Tale Signs are drawn from the sessions from the Oh Mercy album. The version on CD3 appears to be an earlier draft, with significantly different lyrics. But both versions are performed more convincingly that the version on Under The Red Sky, where the vocal sounds a little strangled by Don Was’ rather messy production.  It is not surprising that the song was not selected for inclusion on Oh Mercy as its tone and content are out of step with the delicate balance between spiritual despair and transcendent hope that the album sets up. Born In Time is a kind of experiment in romanticism. It juggles a kind of poetic mysticism with romantic cliché in ways that are sometimes quite striking. 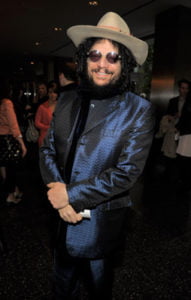 DON WASThe song seems to be addressed to a lover from the narrator’s (perhaps distant) past. The notion of being ‘born in time’ is an interesting one, given Dylan’s stated ambition to ‘stop time’ in his songs, and the fact that the song seems to be comprised of a series of reminiscences which appear in no particular chronological order. In the first verse we enter the song’s dream world through the …stardust of a pale blue light… The narrator’s statement that … I think of you in black and white… sets the love affair in some unnamed past decade. The statement that …we were made of dreams… also places the remembered relationship in an apparently more innocent past time.  Then we are plunged into the dream itself. The lines: …. I walk alone through the shakin’ street/ Listenin’ to my heart beat/ In the record breakin’ heat…are perhaps the most evocative in the song, taking us to the heart of what the narrator is feeling. He is ‘shaking’ with the feeling of the memory, overwhelmed by the ‘record breakin’ heat’ of of passion, and all he can hear is the sound of his own heartbeat. The lines have a strongly suggestive poetical and musical resonance which effectively conveys a sense of nostalgic longing and regret. The regret the narrator feels seems to be as much for the fact that the ‘heat’ of his own passion can only now be found in a dream of the past as for the love object herself. The love he is describing is timeless, yet also anchored in a particular time and place. 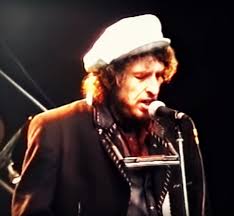 The first of the song’s two ‘middle eight’ or ’bridge’ sections follows. There are substantial differences between the lyrics of the two versions here and this entire section was changed again for Under The Red Sky. After the evocative suggestiveness of what has come earlier Dylan seems to be struggling with his attempt to use cliché in an appropriate way. The Disc Three version runs ….You were high, you were low/ You were so easy to know…  which is succeeded by …You were smooth, you were rough/ You were more than enough…  both of which sound rather forced. At least …oh babe, why did I ever leave ya, or grieve ya… which follows, is direct, showing the narrator’s regret in no uncertain terms. This is also an effective contrast to the poetic leap at the beginning of the next verse: … On the rising curve/ Where the ways of nature will test every nerve… a prescient and evocative description of how it feels to commit oneself emotionally in a relationship. This is reinforced by the even more regretful line : … I took you close and got what I deserved…  There is a kind of emotional honesty here which is missing in the Under The Red Sky version which features the rather vague and equivocal …You won’t get anything you don’t deserve… 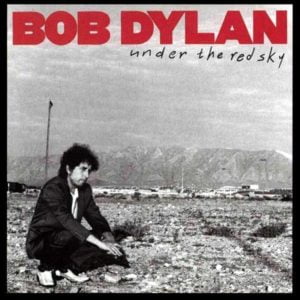 The second bridge section features the effectively jarring … Just when I knew who to thank/ You went blank…  This works as a contrast against the rather odd ….You were snow, you were rain/ You were striped, you were plain… an describe the girl’s changing nature which descends into near-absurdity. In the final verse the references to the …hills of mystery… and the …foggy web of destiny… indeed tend to ‘fog’ the meaning of the song in rather vague metaphor. The song thus flits between effective poetic moments and a sense of uncertainty. The relationship being described arguably needs to be anchored more clearly in a specific time and place to engage the listener. Born In Time thus never really delivers what the intriguing nature of its refrain and the evocative quality of its earlier verses promises us. Dylan is attempting to fuse different modes of expression here, with decidedly mixed results. But the song can be seen as a stepping stone, and arguably an important one, between one mode of expression and another.  None of the three released versions quite manage to realise the potential inherent in its best lines. But in its presentation of these two early versions of the song, Tell Tale Signs further reveals the processes that Dylan was experimenting with in the evolution of the new stylistic modes that came to dominate his work in the late ‘90s and the 2000s.

The subject of the song is not so much the love affair but the memory of the affair, which is now fading, and Dylan seems to be challenging himself to see if he can still feel that ‘record breakin’ heat’. Thus the way the song veers between poetry and cliché is actually quite appropriate. The singer seems to be questioning how valid his own memories are, and in doing so he inevitably swings between poetic detachment and sentimentality. While the young Dylan rejected sentimentality entirely, in both his lyrics and his (deliberately) harsh vocal style, by his late 20s (around the time of Nashville Skyline, when he himself was happily married) he was already beginning to grapple with the fact that feelings of love can in themselves be sentimental. Much of his subsequent treatment of love in song has tried to balance these dynamics. Often, as in the Desire’s heartbreaking confessional Sara or in the inner struggles depicted in much of the introspective material on Time Out Of Mind, he has seemed to be drowning in a kind of sentimental despair. Later, in the songs from his albums of the 2000s, he uses a detached, tongue-in-cheek levity to balance such feelings. Born In Time sits somewhere in between these poles, a song of uncertainty whose sometimes faltering tone questions its own veracity. It is a song in which the narrator tries to convince himself that he really feels something. And we are never quite sure whether these feelings are real or not.