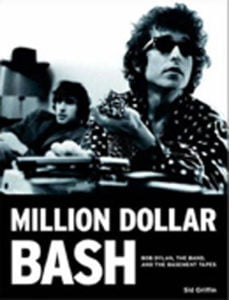 Year by year the legend of The Basement Tapes grows. Here’s a few personal memories. I remember reading about the legendary Great White Wonder when I was at school in the late ‘60s. A little later, as a spotty teenager, I acquired a copy of The Little White Wonder, a white pressed bootleg album, in a flea market (or is that fleamarkt?) in Amsterdam whilst on a ‘cultural tour’ (ahem!)  At the time Bob’s muse seemed to have dried up – this was in the interregnum between New Morning and Planet Waves. But this… Of course it was wonderful. Music from another planet. Totally unlike anything you’d ever heard. Even though it sounded a bit like it was recorded at the end of a tunnel. I played it to all my friends. Hardly any of them could understand what I was raving on about. Was that really Bob Dylan singing in that weird voice? Just what on earth did he mean? …The comic book and the comic book and me, just us, we caught the bus… … I can bite like a turkey/I can slam like a drake… guarding fumes and making haste/ It ain’t my cup of meat … And so on and so on. And who the hell was ‘Tiny Montgomery’ anyway? And why why why had he not brought out these songs? I Shall Be Released… they cried!

Just a few years later (in 1975) we finally got the ‘official release’ with a great picture on the foldout sleeve of Bob and The Band (and Ringo??) looking really cool in a real Basement surrounded by Mrs. Henry and Tiny Montgomery and a real life Quinn The Eskimo. Wow! I could hardly wait. Now we’d hear the songs as they were supposed to be heard. But… wait a minute… why were Quinn The Eskimo and I Shall Be Released, two of the greatest songs, missing? OK, Dylan had already brought them out officially in inferior versions, but that was hardly an excuse. And as for the rest of it… well a couple of tracks, like the fantastic Goin’ To Acapulco and the lugubriously surreal Clothes Line Saga were revelations. And the – as then unheard – ‘new’ tracks by The Band were pretty cool. Some of the tracks we knew sounded pretty similar to that weird white bootleg. But… sad to say… they didn’t really sound any better… The biggest disappointment of the official release was that many of the songs now sounded somehow ‘flat’. And perhaps the greatest musical element of all – the weird and wonderful vocal interplay between Dylan, Richard Manuel and Rick Danko – had been mysteriously suppressed.
Over the succeeding years we’ve heard many new Basement Tapes tracks that weren’t on the official set at all – including the wondrous Sign On The Cross and, perhaps most beguiling of all, the ultra-mysterious I’m Not There (I’m Gone), not to mention hours and hours more of other Dylan compositions and a huge array of amazing covers. And as those scratchy bootleg cassettes were replaced by shiny new CDs and anonymous persons began to lay hands on these recordings with the magic of digital remixing at their fingertips, suddenly it became possible to listen to really clear, great-sounding mixes of the songs ‘as nature intended’, with those glorious harmonies restored. Now the music sounded newly alive and The Basement Tapes revealed themselves as something way beyond what we’d even imagined. Recently Todd Haynes’ film I’m Not There (whose soundtrack includes a beautifully clear mix of the title song, finally released after all these years) has placed The Basement Tapes even more in the spotlight. 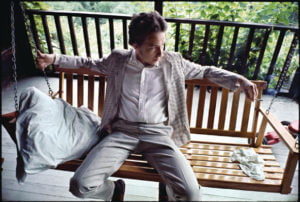 Sid Griffin’s new, lovingly-researched book Million Dollar Bash puts all this into context. He explains how and why the ’75 official release (largely masterminded by Robbie Robertson, not Dylan) sold The Basement Tapes short and he reveals that, although they were not recorded in a studio, they were in fact recorded in ‘wide stereo’ by The Band’s Garth Hudson (who Sid praises greatly as a recording engineer). He explains that, for the official release, the tracks were largely mixed down into mono and that much jiggery-pokery (including the addition of overdubbed parts and even a couple of complete new tracks) was actually done during the preparation of the album in 1975. Sid Griffin is a well-known alt. country musician himself, being a former member of The Lone Ryders, and this may have helped him with connections. The book benefits much from his access to Robertson and the other surviving members of the band as well as a number of other key players in the story. These interviews do much to bolster up the book’s credibility.

Sid writes in an attractive, unpretentious way and structures the book cleverly, beginning with some background on the Woodstock area itself. We then get some well argued and detailed background as to how both Dylan and The Band came to end up together at Big Pink and the other locations where the Tapes were recorded. He gives us many illuminating details about these locations and pays particular attention to the technicalities of how the songs were recorded. We get a colourful picture of the scene in Woodstock at the time, although very little but supposition about Dylan’s private life.  But that’s perhaps how it should be… Sid also does an extremely well researched ‘track by track’ on all the Basement Tapes songs, giving full background on all the cover versions and their background. He also gives us a highly illuminating guide to who plays what and who is singing on every track. All this stuff is naturally of tremendous interest to Dylan/Band fans. He also discusses the musical qualities of the songs with some considerable skill and devotes much attention to the awesomeness of I’m Not There and Sign On The Cross. There’s also valuable background information on the origins of the many cover versions that grace the Tapes.

We also get a detailed account of the ‘aftermath’ of the recordings, with quotes from many of those who were first privileged to hear and then even record the mysterious ‘lost Dylan songs’ as the original acetates from the sessions began to circulate. Perhaps the most impressive thing about the book is the way it puts The Basement Tapes in a musical/historical context, demonstrating how they really began the idea of ‘Americana’ as a form of music, how they helped The Band’s ‘country-funk’ sound emerge from the r and b of The Hawks, how they provided a counterweight to the contemporary excesses of psychedelia. Dylan, of course, never had a ‘Paisley period’… 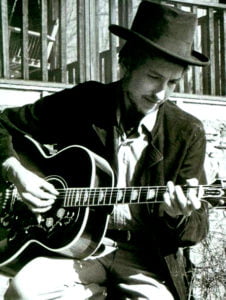 The one thing the book doesn’t really do, however – and this is perhaps strange for a work on Dylan – is to engage in much literary analysis of the songs on The Basement Tapes. This are doesn’t especially seem to be Sid’s strong point, and he does have a tendency to dismiss many of the lyrics as ‘nonsense’.  That seems a little bit of a copout to me – to my ears Dylan’s 1967 songs provide a wealth of literary and other allusions along with many elusive, shifting, but still; identifiable meanings. In his bizarre and sometimes wonderful Invisible Republic (namechecked by Dylan himself, no less, in Chronicles) the great Greil Marcus seems to be taking on this task of ‘decoding’ the songs, before he seems to forget he’s doing this and takes us off on his wild, colourful ride through ‘the old, weird America’. That book on The Basement Tapes has still to be written, perhaps. But, hey, nobody has a go ay Christopher Ricks or Aidan Day for concentrating solely on Dylan’s lyrics. In Million Dollar Bash Sid Griffin has produced an absorbing work of Dylan scholarship for the benefit of present and uture generations.

As Sid tells us rather tantalisingly, the powers that be at Sony or CBS or whatever they call it these days have hinted – just hinted – at the possibility of a proper Basement Tapes box set. Perhaps we should all bombard them with requests for this –The Complete Basement Tapes as the next Bootleg Series volume?  But if so we want the whole lot, including all the extra versions, weird covers etc, all beautifully, perfectly mixed, sounding even better than the best of today’s bootlegs.. It would be a six ort seven CD box set including, of course, the mysterious ‘lost’ studio version of Minstrel Boy which Sid refers to  – along with, perhaps, another bunch of unknown and terminally weird Dylan Basement songs, flashing with far out and extraordinary poetry that he just happens to be making up on the spot!

Every boy and girl gonna get that bang/ 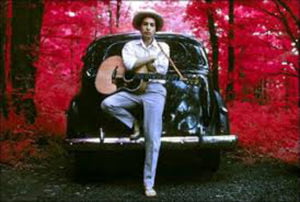