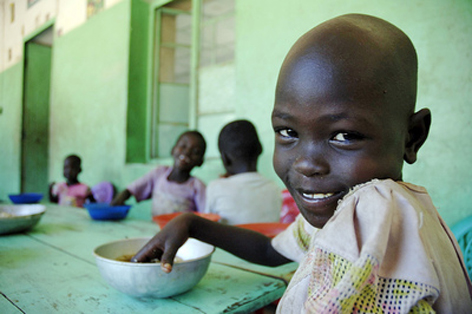 As Sheena came into the living room, Jimmy Carlisle turned down the volume on the T.V. automatic and leaned back in his favourite armchair with a smirk on his face. “Tell me…” He smoothed down one of the long thin brown strands that covered up his bald patch, leaving an oily deposit on his right hand. “Why is it that every time you talk to your mother on the phone you turn into a seven year old?”

Sheena wrinkled up the end of her tiny nose, snorted and went back to her desk. As she bent her head to work, her luxuriant red curls fell over the piles of papers. She worked in a regular, mechanical, rhythm, ticking aparently endless boxes as one pile diminished and another grew. Jimmy smiled in approval at the photo on the wall above her head, a framed shot of one of his moments of triumph outside Dharan airport.

On the screen, blonde fresh-faced young Australians in check shirts mouthed pleasantries at each other.

“Well, I guess you never really grew up, did you, my honey? That’s probably why you ended up as a teacher.” He flicked the channel button onto Wildlife Special. “You do make me laugh though…” He adopted an exaggeratedly high-pitched Scots accent: “Aye, mammy darling, whatever you say, mammy darling…”

Sheena only muttered something deep and guttural. Without lifting her head, she continued applying the red biro.

Jimmy stared at a baboon displaying its bulbous red arse in a gesture of sexual dominance. “Of course, I don’t suppose you can help it, can you, my honey? I suppose it all goes back to your potty training. Or maybe lack of it.”

Sheena’s breathing was getting tighter. She gritted her teeth and gripped the red pen hard.

There was a crack as the biro snapped in half. Sheena stood up, turned round and kicked her chair away. Deep red flush marks stood out on her pale cheeks. She reached up, took the picture down off the wall and held it above her raised knee.”One more word. Just one more. I swear to God I’ll smash this fucker!”

Jimmy raised an eyebrow in mock-astonishment. “C’mon, my honey, don’t let’s get so excited now. You know it brings on your eczema.”

Sheena raised the frame violently, then the red fire in her eyes turned to grey steel. She laid it carefully down on her desk. “You know, Jimmy, I never understood what kind of sick pleasure you get from winding me up. Right now I don’t care. I’ve got sixty more National Curriculum Assessment Sheets to do before tomorrow morning. If you want something to eat stick a Pot Noodle in the microwave.” She glanced over at the antique grandfather clock in the corner of the room. A present from the Aga Khan, or so Jimmy always told his fat journalist friends when he invited them round to eat. “It’s ten to six. You’ll be on in ten minutes. You can lie back and glory in how bloody heroic you are. To tell you the truth, I wish you’d stayed in bloody Somalia. At least then you could patronise somebody else instead of me!”

He raised both hands. “Now, Sheena, my honey. You know what Dr. Singh said about your blood pressure. I was merely commenting on your tendency to express yourself in a somewhat juvenile manner when talking to members of the older generation.” He parted his thin lips, revealing three sparkling front crowns. “But I’m sure you can’t help it. Anyway, what did dear little mammy have to say to you? A recipe for cockaleekie soup, was it?” He curled his lip. “Tips on how to keep your legs frozen together?”&nbsp;

She gripped the edge of the picture with her sharp red fingernails. “So that’s it. You arrive back at three in the morning and expect me to perform for you at your bloody will. Anyway, I don’t know why you bother to ask. I’m sure you were eavesdropping on every word.”

“Cut the crap, Jimmy. You know very well what was said. As far as I’m concerned I’ve a perfect right to make the arrangements for Christmas this year. If you think I’m going to book into another hotel with you like last year so you can hobnob with your bloody media pals, you’ve got another thing coming. For all I know, you’ll get called away at the last moment and leave me stranded again. -“

He shook his head slowly. “There’s no pleasing you. A four-star hotel in Tenerife. Room service, a swimming pool-“

“Jimmy, have you any idea at all how lonely she’s been the last two years? Or how lonely I’ve been? Most of the time, all I ever see of you is that face on The News, gloating over some disaster or other.”

He smoothed his hair down. “Now, my honey, let’s get this straight. You mean to tell me that, despite what we agreed, you’ve arranged for us both to spend Christmas in Dumfries with your dear little deranged mother. You mean we have to travel four hundred miles to spend three days being forced to pull crackers and wear party hats and watch the Queen’s message and listen to the old girl’s senile dribblings-“

Jimmy ducked just in time. The framed photo smashed against the thick polished glass of the drinks cabinet behind him. Sheena stepped forward, grabbed his chin in one hand and pointed murderously at his right eye with the forefinger of her other. “I dinnae want to hear one more word from you about my mam. Not now, not ever. Got that?”

Panting, she picked up the framed photo from where it had landed next to his chair. The glass was completely cracked. As she did so a piece of yellow, folded, paper fell from from behind the picture into his lap. He tried to grab it, but he was too late. She had already unfolded the letter and had begun to read aloud: “… oh my darling Jimmy… that last night in Kuala Lumpur… your hands so soft… your hard body thrusting into me… I never came like that before… come back soon…“

She let the note drop onto the thick piled blue carpet.

“I knew it,” she said. That letter you wrote me last year: …so sorry my honey, but I have to spend another week in Kuala Lumpur. Special Engagement… Don’t expect me to be surprised about the tarts and whores you go with when you’re off on your trips. But this is a little blatant, isn’t it?”

Jimmy began to laugh. At first it was his usual chuckle but then his mouth widened and a thin trickle of saliva began to drip down onto his collar, accompanied by a loud guffaw. “But Sheena, my honey, you’re hardly in a position to lecture me about this kind of thing.”

“What d’you mean? You think I have time for affairs with a job like mine? D’you suppose I’m having it off with the milkman or what?”

“Ah well, my honey, we journalists have a way of knowing everything that goes on.” He smoothed a stray greasy wisp down. “It just so happens that a friend of mine gave me certain information regarding your…” He suppressed a giggle. “…your, erm… movements… during my assignment in Sarajevo.”

“Jack will tell you anything once you’ve got a few whiskies down him. Anyway, apparently you ‘go like the clappers’. Told me how he’d got you pissed on sherry.” He laughed. “Australian sherry. Even I never thought you were that cheap.”

Sheena crumpled and uncrumpled the yellow sheet in her fists. “You mean you actually knew? And you didn’t even care?” The colour had now drained entirely out of her face.

He shrugged. “Probably been happening every time I go away.”

He turned up the volume:

…in tonight’s extended News at Six, the third of

our reports on the famine in war-torn Somalia.

We must warn viewers that certain scenes may be

distressing. This special report was put together by Jimmy Carlisle…

The camera pans along a row of tents in the desert and there is Jimmy, with his best concerned face, the breeze blowing his hair, holding a sick, emaciated child in his arms. The shot moves into focus and we see the flies feeding on the corners of the child’s eyes.

“Tomorrow…” Jimmy intones dramatically, “this child will be dead.“