Why someone’s life has been spared…

Beyond The Horizon underlines the irony of Bob Dylan calling his latest album Modern Times. Once Dylan was one of the leaders of a musical movement which seemed to be aiming to sweep away the detritus of the past: now he celebrates the musical values which songs like Like A Rolling Stone and Desolation Row once seemed to have put into permanent eclipse. Dylan’s contemporary work is now quite explicitly steeped in a semi-mythical pre-war world; evoking an era when the phenomena of mass communications and mass fame was still new and dazzling. Nowhere is this more evident than on his delightful, teasingly endearing Theme Time Radio Hour, which has been running for around ten months now on XM Satellite Radio. Theme Time presents ‘Uncle Bob’ the ‘jovial host’, always ready with a merry quip, smirking behind his matinee idol moustache as he delivers a series of tunes from the 1920s to the 1950s – the pre-rock and roll world of hot jazz, primal blues, downhome hillbillies and sweaty crooners; a ‘pre-modern’ world we tend to see through a filter of sepia tones. When asked by an email correspondent why he plays so many old songs and so few new ones ‘Uncle Bob’ drolly replies … I ain’t got nothin’ against new songs… It’s just that there are a lot more old songs than new songs… 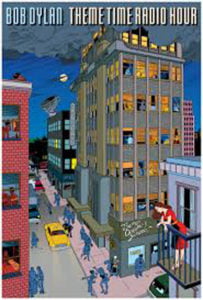 Take that how you will… Dylan, of course, has always loved to be mischievous and paradoxical. Modern Times is an album which delights in using the musical and lyrical styles he celebrates on his radio show with such cheerful perversity. Yet he twists those styles into new and alarming shapes. Beneath the apparently comforting surface of his ‘crooning’ style on Spirit On The Water and Beyond The Horizon he is asking searching questions – about creativity, about the ageing process, about the ‘meaning’ of life itself. Modern Times is – despite its use of ‘the past’ as a formal structure – a thoroughly contemporary piece of work, precisely because it challenges our notions of what is contemporary. Throughout the twentieth century popular music ‘progressed’ through many different styles which, by the 1990s, were already being ‘recycled’ into new forms. While 90s hip hop and dance remixers ‘ironically’ re-presented and re-formed the musical cultures of the 60s and 70s into contemporary forms, in the 2000s Dylan takes us beyond such irony: he straightfacedly presents the kind of musical styles that were once mocked by ‘hip’ youth as being only for ‘old fogies’; wearing them like a series of ironic masks, yet at the same time taking those styles perfectly seriously. The biggest irony of all this is that in many ways Dylan is still doing what he has always done: filtering the present through the past. His art has always been drenched in tradition: those early ‘protest’ songs were almost always based around ancient folk-melodies. Nearly all of them make references, in some form or other, to an ancient judgmental, biblical morality. Yet the Dylan of today is – despite his apparent continuing preoccupation with ‘salvation’ and ‘redemption’ – possessed by a type of ‘youthful’ joyfulness and lightness of touch which his more earnest younger self never enjoyed. Although Modern Times takes us into some of the darker places of the contemporary psyche, its dominant mood is confident, even triumphant. Dylan, remember, had always wanted to ‘stop time’ in his songs. Now he sings to us from a timeless place, teasing us and winking, twirling his ‘walking cane’, with a wicked glint in his eye. As he once sang …I was so much older then, I’m younger than that now…

Beyond The Horizon is a song about transcending the fear of death. It seems to contain all those romantic, corny songs which tell us about a love which will ‘last forever’, and to stretch their sentiments to the logical extreme. It manipulates cliché to go beyond cliché. As far back as Nashville Skyline (1969) Dylan had played with the nuances of cliché. On the monumental I Threw It All Away, by the brilliant subtlety of his phrasing he turns an apparently clichéd line like ..love is all there is/it makes the world go round… into something quite amazingly moving. In Beyond The Horizon he assembles a whole song out of clichés, taking us to ‘the end of the rainbow’ through ‘the long hours of twilight’, and ‘crimson skies’ and referencing various old songs like ‘The Bells of St. Mary’s’ and ‘Round About Midnight’. But his pronunciation is precise and the way he balances such stock phrases is very careful. Over a soft shuffle of standup bass and a whisper of ‘Hawaiian’ steel guitar, Dylan’s voice is querulous, sighing… straddling a thin line between ‘Dylanesque’ harshness and a kind of appealingly innocent sweetness. He takes it all so lightly, skipping over the lines like Fred Astaire, with the calm restraint of Nat King Cole or Bing Crosby. Where once he had rewritten the supernatural ballad Nottamun Town for Masters of War, now he bases his song on the old romantic weepie Red Sails In The Sunset. Dylan’s admiration for singers like Cole, Crosby and Sinatra is quite sincere. He likes their self-restraint, their wry control of phrasing. So his own ‘crooning’ style is never parodic, even though we sense that he is somehow giving us the wink all the time. 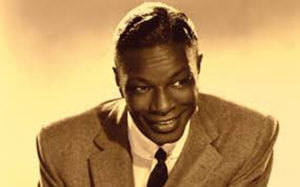 The singer begins by conjuring up an imaginary world ‘beyond the horizon’ situated somewhere …in the long hours of twilight… This is a song written, of course, by a man in his 60s, aware of his own imminent mortality. Yet while on Time Out Of Mind’s Not Dark Yet – his most profound meditation on mortality – he tell us that …Sometimes my burden seems more than I can bear… now he seems to look into the face of death with a sly shrug and a playful wink. Few Dylan songs express delight in such a way… the wistful Tomorrow Is A Long Time (1963) perhaps, or the pleading Emotionally Yours (1985). But whereas such songs profess great sincerity, Beyond The Horizon is infused with an overwhelming sense of relief and sheer dizzy humility. He presents us with a vision of a kind of Paradise imagined as an ‘all singing, all dancing’ Hollywood musical. The singer has entirely come to terms with his mortality… he is already in Paradise, a place where …life has only begun… skipping a foxtrot in tie, tails and top hat. It’s as if he has followed Dorothy ‘over the rainbow’ into a garishly coloured fantasy land. But this is not a land beyond death. He seems to be telling us that once our anxieties about death are cast aside, then we can experience Paradise on Earth. In this place …love waits forever/for one and for all… This is a place where earthly desires can be fully realized. The singer pines for his love, his ‘wretched heart’ pounding. He has been ‘kissed by an angel’ yet he experiences ‘mortal (not ‘immortal’) bliss’. Now he dances with his love, cheek to cheek: … Every step that you take, I’m walking the same… His love for his ‘angel’ has ‘redeemed’ him ‘just in time’, saving him from despair. For a moment he is thrown back in time to the place he has risen out of, where …it’s dark and it’s dreary… You can see the tear in the corner of his crooner’s eye: ..I’m wounded, I’m weary… he confesses …my repentance is plain…. Now he is down on one knee, offering up a single red rose, thanking her for the redemption she has given him. He marvels at his own survival, feeling that his ‘life has been spared’ to be here in this triumphant moment:.. I still can’t believe… he sighs…that you have set aside your love for me…

As with so many of Dylan’s ‘love songs’ one is left wondering who is being addressed. It’s tempting to imagine an ageing lothario being renewed by the caresses of some young ‘precious angel’, lying in bed ..in the soft light of morning… as he watches her sleep, marveling at how her beauty and vitality has filled him with such ‘mortal bliss’. Yet for Dylan the spirits of women and the spirits of his muses have always been inseparable. He is, after all, a Late Romantic Poet, the heir of Shelley and Keats as much as of Robert Johnson and Muddy Waters. Just as in Spirit On The Water he pleads with a lover who represents and embodies his own creative energies, here he seems to be marveling in the way that, ‘beyond the horizon’ of his expected creative life, he has been renewed by being able to once again be embraced by the creative spirit. In the song’s occasional moments of doubt, we sense a certain frustration that life may not be long enough for the singer’s poetic energies to be fully spent, but in the end he rejoices in having …more than a lifetime/to live loving you… and so celebrates the boundlessness of the poetic spirit itself. Beyond The Horizon, however, is also a kind of drawing in of breath, a preparation for the plunge into the increasingly dark, apocalyptic themes of the album’s three remaining songs, a fleeting glimpse of Paradise before we are led into the dark heart of our Modern Times.