It’s only once every few years that you walk out of a film and you are so gobsmacked that you can hardly speak. It happened to me a couple of days ago on my first viewing of Alfonso Cuaron’s Children of Men, adapted from the novel by P.D. James. I’m still reeling from it, but perhaps the most shocking part of the whole experience was walking out of the multiplex onto the streets of my home town – Lancaster, actually, but it could have been be a thousand other towns in England on a Saturday night. Gangs of drunken twenty somethings in white shirts and tiny dresses were roaming the traffic-less streets while nervous-looking policemen and women, tooled up to the nines in body armour, rattled instructions into hand held radios. The streets were strewn with rubbish. The cameras craned over us, watching our every move. The police brushed against my friend and I as we attempted to walk innocently home, as if we were not there. Although the movie depicts a far more dangerous scenario, the parallels with what things are like NOW was glaringly obvious.

That was why the film was so scary. Though it’s set about twenty years into the future, its not futuristic. It’s not science fiction. In fact, technologically things seemed to have gone backward. Nobody rattled on about the bloody internet. Quite possibly there was no internet. The rest of the world – apart from Britain, it seems, and a few other enclaves – had been blown to hell in nuclear wars. Britain had turned into a fascist state which imprisoned millions of desperate refugees in huge ghettos – a homegrown holocaust. The plethora of mainly Eastern European voices of those desperate caged figures was quite deliberate – showing how the ‘asylum seeker’ paranoia in this country, and the proposed laws restricting movement into the Britain from ‘certain’ Eastern European countries, are rooted in the kind of thinking that led to the holocaust itself. And at times the dangerous scenario that everyone faced on the streets in everyday life put me in mind of Iraq today, where the only safe thing to do is stay at home (and even that isn’t safe) 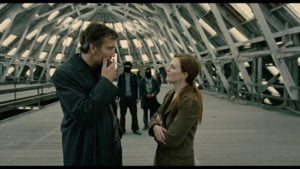 CLIVE AND JULIANNE: They should have stayed at home

But the script is clever. There’s hardly any mention of Islamic terrorism or anything like that. This is not a ‘post 9/11 film’. Nor does it bother with any ecological guff. It’s a moral fable in the tradition of Swift and Kafka and Orwell. Occasionally it reminds me of Terry Gilliam’s devastating dystopian satire Brazil and his apocalyptic Twelve Monkeys, but the film is less playful and spectacular than either of these. What gives it its magical edge is its proposition that all the women in the world became infertile in 2008. Among its most haunting scenes are those in an abandoned school. Thus, it seems, the world is utterly fucked. already. Yet there is one woman who offers an almost magical ray of hope

I don’t want to go on because I don’t want to spoil the film for anybody. It’s a really gripping thriller and has you clutching your seat and nearly screaming. Clive Owen, as the hero, is suitably taciturn and cynical. Julianne Moore is tight lipped as his terrorist ex-girlfriend. The dreadlocked terrorists, who want to start a revolution, are even bigger bastards than the police. Michael Caine is wonderful as an aged hippie dope dealer. They pump antidepressants intro the water system he moans but ganga is still illegal. Despite all the doom and gloom, there are a number of really funny moments. And jokey Pink Floyd and contemporary Dylan references. There’s a real flying pig over Battersea Power Station. As one character says to another (Paraphrasing Dylan’s 2001 song Bye And Bye) The future now is a thing of the past. The film ends with Jarvis Coker singing a beautifully dry ditty called The World Is Still Ruled By Cunts.