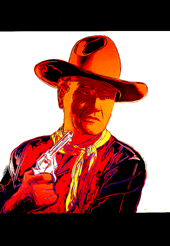 In that breeze that never ceases,

My heart it fairly bursts with pride

As the heavenly wind increases

The stars and stripes are way up high,

Since we invaded heaven

Long ago it all got written down

In the book of revelations,

It was the Lord himself who allowed

We was the chosen nation

But we’d had enough sittin’ and waitin’

We just wheeled them beauties outa them silos..

Yep, we nuked that bastard Satan

In his divine wisdom, his holiness and grace,

The Lord he said we done his work so well,

He gave us the mineral rights and contracts

For the exclusive exploitation of hell

But then, goddammit. he tried to stop us

Gettin’ in on his territory,

He didn’t want no commercialisation,

Leastways, that was his story…

Well, we begged, we pleaded him

To let in our corporations,

We even tried to get a resolution

At the United Nations

Now, we never wanted to cause no fuss,

Or start no unholy ruction,

But we just had to point out that his thunderbolts

Were weapons of mass destruction

We also had do tell him that though he ruled

By a process of divine selection,

When our marines had taken over

He’d have to stand for election..

Anyways, the work was done

In a couple of weeks we’d freed his nation,

With our precision-guided missiles

We met just a little resistance,

So if you see any of them renegade archangels

We’d be happy for your assistance.

On this proud and wondrous day,

The Lord himself is tied up and bound

Behind the wire at Guantanamo Bay